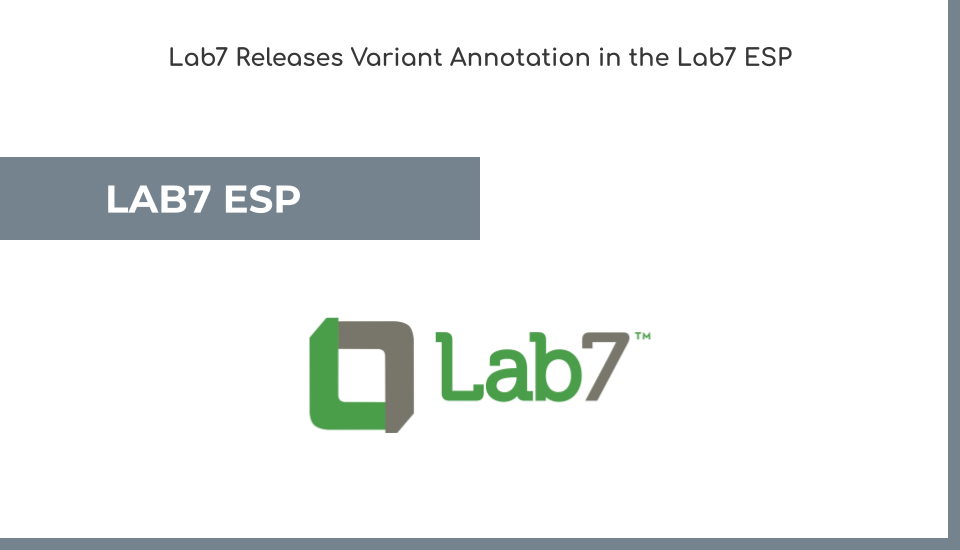 AUSTIN, TX – April 20, 2015 – Lab7 Systems, Inc., the developer of the Enterprise Sequencing Platform (ESP) for the management of next-generation genome sequencing (NGS) data and workflows, announced the addition of the Clinical Annotation Manager (CAM) module to the Lab7 ESP. The CAM is a complete data management and visualization tool that ties together third-party variant annotation databases with in-house annotations and allows clinicians to quickly build ACMG-style reports from their VCF files. The CAM augments the functionality of the Lab7 ESP, a software platform that gives users complete control over their laboratory operations, from sample submission, through instrument runs, analyses, and actionable reports.

“The CAM adds to our mission of providing a single platform solution that enables our users to employ the tools of their choice to manage and analyze their NGS data,” said Chris Mueller, Ph.D., President and CTO of Lab7 Systems. “While they can use any annotation database they want, we give users an environment to aggregate and query multiple databases as they create actionable reports, in much the same way our Analysis Pipeline Manager allows them to use whatever bioinformatics tool they want for secondary analyses.”

“While they can use any annotation database they want, we give users an environment to aggregate and query multiple databases as they create actionable reports”
– Chris Mueller, President & CTO

To foster increased adoption of the Lab7 ESP and to leverage the power of the CAM module, Lab7 Systems has launched the Clinical Sequencing Acceleration Program (CSAP), a limited-time opportunity designed for small pathology labs that are just starting to integrate sequencing into their offerings. As part of CSAP, pathologists will have full access to the Lab7 ESP under preferential licensing terms for three years. Lab7 Systems is currently seeking a maximum of five labs to participate in this program.

The company has also launched the Academic Sequencing Acceleration Program (ASAP), since Lab7 Systems understands that, unlike clinical labs, academic labs operate under a different economic model that often limits access to commercially supported software tools. ASAP is an open-ended program that gives academic core labs an unlimited license to the Lab7 ESP at a fraction of the cost of the full commercial license.

“We appreciate the do-it-yourself nature of many academic labs,” added Dr. Mueller. “As a platform, the Lab7 ESP provides the nuts and bolts for an informatics infrastructure while allowing users to customize it for their needs. Through CSAP and ASAP, we can help labs increase productivity and free their informatics staff to spend more time on the their science instead of managing all their software.”

About Lab7 Systems, Inc.:
Lab7 Systems is a software developer that has a vision to reduce the level of hands-on data management by bioinformaticians, scientists, and IT teams who are struggling with the massive amounts of next generation sequencing data that are being generated. Lab7 understands there is a critical need for a platform that integrates the disparate and often disjointed scientific software toolkit that is being used, thereby freeing up the valuable human resources who are currently tasked with doing this.